I only wrote on the first and last days of this trip. The rest of the time was spent sketching. Here are some snippets, for what they’re worth…

3 Settembre
We didn’t sleep on the long flight to Roma. Had no trouble finding Mom and Dad at the terminal. The waiting there was hard. We had 6 rollie bags between the 4 of us and were bumbling around looking for a good lunch place to hang out in. I bought water and was sort changed by 5 Euros which was par for being fresh of the plane, I guess. 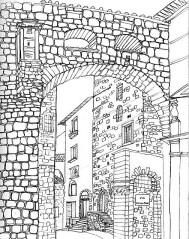 Mitch was chomping at the bit to find the bus stop and rightly so—we thought it was on one end of the terminal but ended up running around asking people where the Sulga bus stopped. Across the street, down the block to a motley bunch of vehicles.
A nice drive through Roma and the countryside—though very hot in the stationi. When we stopped at a little closed gas station, Dad got out to find a WC and we ended up waiting for him… I could just imagine a scenario of the bus taking off and leaving him behind in the boonies—just like that movie “Bread and Tulips.”

Dropped in Perugia and one taxi ride later, we were here at our lovely apartment woohoo!

What a cool town and nice place we’re staying at. Nicola is a nice guy with a hairline like this.

The house is split level—all up and down sepia brown tiled floors throughout and nicely appointed. The first floor, with that archway is really a built out garage. It’s musty and cool and would be nice if it weren’t so smelly. Then up two flights of stairs to the mail room—2 windows, bright, lovely! A comfortable room to hang out in. Another flight up is the kitchen which is certainly bigger than ours in SF, with a small table and all the fixins. There are nice windows throughout with delightful views of the medieval buildings around us. 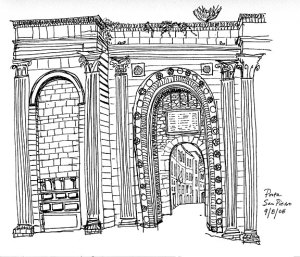 The bathroom with big tub (ours) and the master suite (with a great closet and private bath) are on the next story. Then another short story up is the smaller bedroom which is a bit of a challenge size-wise. The beds are hard thought not bad. One side is a little difficult to get in and out of due to an elevated “side” of the bed. But the view from our little window is lovely at night—tops of the medieval buildings aglow in street lights. Mysterioso.

Lots of activity in the courtyard at night. Some guys playing music (Mitch says they were trying to learn a Pink Floyd song), People talking… 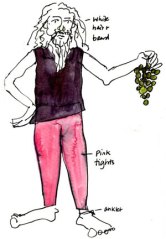 We walked up the narrow vias to Corso Vanucci where all the outside cafes are. Kinda like those at the Zocalo in Oaxaca. On our way up, we passed some small barking dogs and their owner, who walked out of his doorway to quiet them He was quite the sight. Long, white hair and beard, pink stretch pants, big, bare feet. Holding a bunch of grapes away from his body like they were a dead fish.

We had what was probably the worst meal you can get in Italy. Pre-fab canned food for dinner (20 Euros/couple which is around $32) Now we know where NOT to go.

7 Settembre
The days hove flown! This town is so cool! We have been exploring and eating and there’s still more to explore. Sheesh! It’s our last day. We’ve been running around drawing and painting arches all over th city. Mom is really prolific! She’s done many paintings and uses a shorthand that I wish I could do.

I’m learning.. It’s been so much fun! Great food. Pasta with chicken liver sauce, incredible homemade tortellini with pumpkin and such,. Wow. And great wine. At Caesarino, the waiter charged us 8 Euro for ½ bottle the first night and 6 Euro for ¾ bottle on the second. 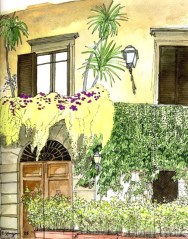 I painted this in Roma from our favorite café while drinking rich cappuccino.

Rome kicked our butts. Hot, very touristy, and incredible We had a great time, though. Went on a pizza stroll around the area surrounding the Vatican. My favorite pizza had pepperoncini on it. We found one bakery with the best canoli in the World. I could live on canoli and cappucinos.