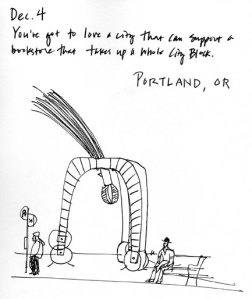 From my early December trip to Portland.

Went to see my great old pal, Liz Lamade, our former neighbors, the Harts (who we miss), and an old colleague from Modem Robert Sandler, his wife Irene, and their baby Isaac (a cutie). Spent some time wandering around on my own downtown and in the Pearl. It was cold. Great city.

Turns out, Powell’s is a good place to sketch. Would have done a full scale drawing of this guy but was blocked by a bald dude.

Killing time when I missed my train to Seattle, I found the place where I’d had a memorable chicken salad sandwich (the bread was perfect). They were playing 70’s folk rock: Jackson Browne, S & G, Carly Simon, Steve Forbert (?!), Jim Croce on a bad system that kept skipping.